We live in California, one of the most desirable places to live in the U.S. However, we are subject to disasters such as earthquakes, floods, and especially wildfires with the multi-year drought that continues to affect our region.

When a disaster hits, there’s not much time to plan ahead for breaking news coverage. Journalists—whether working in print, broadcast, or online—are often on their own to get the story covered properly. That includes following journalistic ethics and values in veracity, credibility, truthfulness, etc. This four-part workshop offers hands-on skills from journalism educators, all who have worked in the news and/or public relations industry, on different way to cover disasters, especially wildfires. 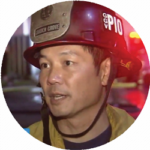 This includes the final session with Public Information Officer Capt. Thanh Nguyen, who currently holds that position with the Garden Grove Fire Department and who was the PIO for the SoCal Team One Fire Management Team in charge of the recent Holy Fire. Nguyen will briefly discuss his role and duties as a fire department PIO and then there will be a Q&A session.  As a finale, we will conduct a mock press conference so all can play the roles they would if there were a real wildfire.

Session 1. / 10:30 – 11:30
AMARA AGUILAR will demonstrate innovative ways to tell a news story using Instagram Stories as well as other other tips/tools that can be beneficial in a journalist’s duties when there’s breaking news.

Session 2. / 11:45 – 12:45
STACI BAIRD segues into covering fires and other disasters, using content curation, which allows journalists to use text, images and video from social media for storytelling.

Session 3. / 2:15 – 3:15
KARYN BOWER will discuss and demonstrate how to cover audio and video on breaking wildfire news stories. Press conference protocol and etiquette for reporters will also be covered.

Session 4. / 3:30 – 4:30
MARYANNE SHULTS introduces Capt. Thanh Nguyen who will not only share his duties as a fire/EMS public information officer, but will host a Q&A session and a mock press conference for students to practice what they learned in the workshop sessions.

AMARA AGUILAR
Amara is a digital journalism professor at USC Annenberg School for Communication and Journalism. She teaches journalism for mobile/emerging platforms, social media, visual journalism, and interactive design, among other courses. Amara has written for the LA Times, CNN and other outlets. She has worked as a designer, visual journalist, reporter, social media engagement producer and consultant.

STACI BAIRD
Before relocating from the Bay Area to Southern California for a full-time teaching position at the University of La Verne, Staci was Engagement Editor for Global Press Journal, an award-winning digital publication that produces high-impact news stories from some of the least covered regions of the world. She was journalist-in-residence at Notre Dame de Namur University and previously taught digital media courses at San Francisco State University and the University of Tennessee. Staci earned her master’s degree in journalism from Kent State University. Her research interests include social bots, social media metrics, digital and social media innovations in teaching. She was associate director of digital and social media at the Stanford School of Engineering, senior internet marketing manager for Lucasfilm, innovations project manager for E.W. Scripps Newspaper Interactive, multimedia project manager for MSN Money and a community manager for CBS Interactive. Staci is a long-time member of the Online News Association and a member of Journalism and Women’s Symposium. She was honored with the Distinguished Service to Journalism Education Award by the Journalism Association of Community Colleges in 2013. Her work in digital media has been recognized by the Society of Professional Journalists and the Kansas Professional Communicators.

KARYN BOWER
Karyn majored in Television, Radio & Film at Saddleback College and Communications & Media at CUNY, City University of New York. She is currently Associate Professor at Saddleback College, Mission Viejo, teaching Video Journalism and the History of Television. Karyn’s students are members of the OC Newsteam, producing video and news content for OC Now. This student-run television production covers trending Orange County stories and airs on Cox Channel 39 throughout the O.C. You can find OC Newsteam’s videos at OCnewsteam.com. Before starting her teaching career in 2013, Karyn interned and worked for a number of Orange County and LA-based news stations including KOCE, KABC 7, and KDOC-TV. Karyn worked as a video journalist shooting and editing her own stories for air. In addition to reporting, Karyn was a segment producer and occasional news director, helping to coordinate coverage between her station and media partner OC Register. Karyn served on the Board of Directors for multiple organizations, including the Lake Arrowhead Film Festival. She wore many hats during her time at LAFF, including Media and Press Relations Rep, chairperson, and Video Production Producer.

MARYANNE SHULTS
MaryAnne was the co-adviser for the Lariat , the student-run news publication and Orange Appeal, the news magazine at Saddleback College. She is an associate professor in the journalism department currently teaching mass media and society. She is also an adjunct lecturer at Cal State Fullerton where she has taught media writing, feature writing, mass communication/society and principles of communication research. She has also co-taught video journalism and interactive media design, as well as production classes emphasizing journalism infusing blogging, social media, data reporting, and investigative reporting. She was co-owner of a web development and design firm for over 20 years, specializing in custom programming, design and content development and today works as a media consultant in the areas of motorsports, health communication and social media strategy. She is an alumnae of both Saddleback College and CSUF and a proud native of the Western/upstate New York State’s Finger Lakes region.