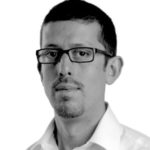 After Joaquin Alvarado earned his MFA at UCLA in the early 2000s, he became the Director of the Institute for Next Generation Internet at San Francisco State University, when some of the technology we have today was only concepts in the eyes of researchers and developers. He then briefly worked at the Corporation for Public Broadcasting and in 2010, he moved to American Public Media as the senior vice president of digital innovation, according to his bio on LinkedIn.

He then worked as the CSO and CEO at the Center for Investigative Reporting in Berkeley. With an innovative drive, an entrepreneurial spirit and a leadership experience in journalism, he branched out and started StudioToBe last year, a multimedia news company, which is based out of Oakland.

“There’s a lot of hope out there that somehow investigative reporting would be the solution. I think it’s much deeper — we’re not one investigative story away from rebalancing how the country is doing,” Alvarado told Janelle Bitker, a reporter for the East Bay Express.